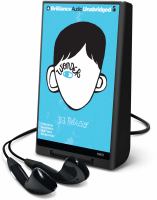 View other formats and editions

View all formats and editions (14)

Search for related items by subject

August, nicknamed Auggie, is a 10-year-old with a facial deformity that causes others to avoid and even shun him. When he enters a mainstream school, Auggie must learn to cope with difficult new situations and new people. The narrative is told from the perspectives of Auggie, his new friends, his sister, and her boyfriend. Steele's Auggie is raspy, quick, and delivered in a conversational tone, while Rudd and Podehl give a full range of vocal performances that bring the remaining characters to full light. (c) Copyright 2013. Library Journals LLC, a wholly owned subsidiary of Media Source, Inc. No redistribution permitted.

*Starred Review* Kids' books about befriending somebody different could fill a library. But this debut novel rises to the top through its subtle shifting of focus to those who are normal, thereby throwing into doubt presumptions readers may have about any of the characters. Nominally, the story is about 10-year-old August, a homeschooled boy who is about to take the plunge into a private middle school. Even 27 operations later, Auggie's face has what doctors call anomolies; Auggie himself calls it my tiny, mushed-up face. He is gentle and smart, but his mere physical presence sends the lives of a dozen people into a tailspin: his sister, his old friends, the new kids he meets, their parents, the school administrators the list goes on and on. Palacio's bold move is to leave Auggie's first-person story to follow these increasingly tangential characters. This storytelling strategy is always fraught with peril because of how readers must refresh their interest level with each new section. However, much like Ilene Cooper's similarly structured Angel in My Pocket (2011), Palacio's novel feels not only effortless but downright graceful, and by the stand-up-and-cheer conclusion, readers will be doing just that, and feeling as if they are part of this troubled but ultimately warm-hearted community.--Kraus, Daniel Copyright 2010 Booklist


Auggie Pullman was born with severe facial deformities-no outer ears, eyes in the wrong place, his skin "melted"-and he's learned to steel himself against the horrified reactions he produces in strangers. Now, after years of homeschooling, his parents have enrolled him in fifth grade. In short chapters told from various first-person perspectives, debut author Palacio sketches his challenging but triumphant year. Though he has some expectedly horrible experiences at school, Auggie has lucked out with the adults in his life-his parents love him unconditionally, and his principal and teachers value kindness over all other qualities. While one bully manages, temporarily, to turn most of Auggie's classmates against him (Auggie likens this to becoming the human equivalent of "the Cheese Touch," a clever Diary of a Wimpy Kid reference), good wins out. Few first novels pack more of a punch: it's a rare story with the power to open eyes-and hearts-to what it's like to be singled out for a difference you can't control, when all you want is to be just another face in the crowd. Ages 8-12. Agent: Alyssa Eisner Henkin, Trident Media Group. (Feb.) Â© Copyright PWxyz, LLC. All rights reserved.